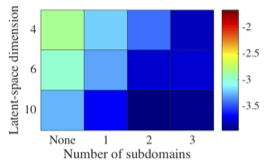 This work proposes an approach for latent dynamics learning that exactly enforces physical conservation laws. The method comprises two steps. First, we compute a low-dimensional embedding of the high-dimensional dynamical-system state using deep convolutional autoencoders. This defines a low-dimensional nonlinear manifold on which the state is subsequently enforced to evolve. Second, we define a latent dynamics model that associates with a constrained optimization problem. Specifically, the objective function is defined as the sum of squares of conservation-law violations over control volumes in a finite-volume discretization of the problem; nonlinear equality constraints explicitly enforce conservation over prescribed subdomains of the problem. The resulting dynamics model-which can be considered as a projection-based reduced-order model-ensures that the time-evolution of the latent state exactly satisfies conservation laws over the prescribed subdomains. In contrast to existing methods for latent dynamics learning, this is the only method that both employs a nonlinear embedding and computes dynamics for the latent state that guarantee the satisfaction of prescribed physical properties. Numerical experiments on a benchmark advection problem illustrate the method's ability to significantly reduce the dimensionality while enforcing physical conservation.